Since November 2004, University Professor Dr. rer. nat. Johannes Reichmuth is the head of the Chair of Air Transport and Airport Research, who also heads the institute of the same name at the German Aerospace Center (DLR) in Cologne and Braunschweig. This constellation enables close cooperation between the two institutions.

In addition to teaching for students of various disciplines, research and consulting services are the focus of the activities at the chair. Performance analyses for air traffic facilities and systems are the basis for the dimensioning and optimization of relevant infrastructure elements and the associated processes. The Chair of Air Transport and Airport Research has detailed knowledge and extensive experience in the field of planning, dimensioning and optimization of airport facilities, also in relation to the surrounding airspace. Within various projects and research activities, the focus has been on questions concerning the technical capacity for airport airside and landside as well as the financial and environmental impact of infrastructural and operational modifications.

The growing demand for air traffic worldwide is leading to increasing complexity of airport facilities and growing traffic loads on all air traffic infrastructure components. The mapping and evaluation of these usually very complex interrelationships increasingly requires the use of simulations in aviation science. The Chair of Air Transport and Airport Research has licenses for the fast-time simulation tool SimmodPLUS for the representation of airside traffic flows, both in the airport area and in the airspace. In order to simplify the application of airside simulation and especially the processing and analysis of the output data, the Airside Simulation Analysis Tool, short ASA, was developed at the Chair of Air Transport and Airport Research. The German Aerospace Center (DLR) provided the software TOMICS for the mapping of the airport landing side procedures and processes. In addition, the chair has licenses for the simulation software CAST Terminal of the ARC. With the help of simulations, planning alternatives and possible scenarios can be examined before their implementation in reality. It is possible to evaluate investments in terms of their effectiveness and efficiency before they are implemented.

The chair offers three blocks of courses, which are based on each other in terms of content.

The technical courses "Planning and Design of Airports I + II" each consist of lectures and exercises and are intended in particular for the study courses Civil and Industrial Engineering and Transport Engineering and Mobility. The course includes location determination, dimensioning of flight operation areas, operational procedures for optimal capacity utilization as well as planning and operation of a passenger terminal. An important aspect of this course is fast-time simulation as an instrument for planning and analysing airside and landside system components. In the exercise course, students are introduced to the terminal simulation CAST: In a computer exercise, students will independently recreate terminal models and perform simulations. In addition to the subjects of lecture and exercise, an excursion to Frankfurt Airport is offered to give students an insight into the processes and infrastructure facilities of Germany's biggest airport.

The business management oriented lectures "Airport Management I + II" are offered interdisciplinary and deal with the economic and aviation political aspects of airports. The high practical relevance of this lecture is ensured by the involvement of the former Technical Director of Flughafen Köln/Bonn GmbH. The lecture enables students to participate in an excursion to Cologne/Bonn Airport, which focuses on the special function of the airport as a location for express freight.

The lecture "Air Transport Economics" places the concerns of airports in the context of the entire air transport system and its global developments. The economic situation of airlines, airports and airfreight is considered and scenarios of air traffic influenced by digitalization are examined. The lecture is held by the Head of Scientific Network at Roland Berger, who previously led the Transportation Competence Center in the same company.

The three main topic blocks are accompanied by the cross-departmental courses offered by the transport institutes at the Faculty of Civil Engineering: The course "Introduction to Transport Engineering" and the course "Financing of Transport Infrastructure and Operation" address special issues of air traffic in the corresponding lectures. 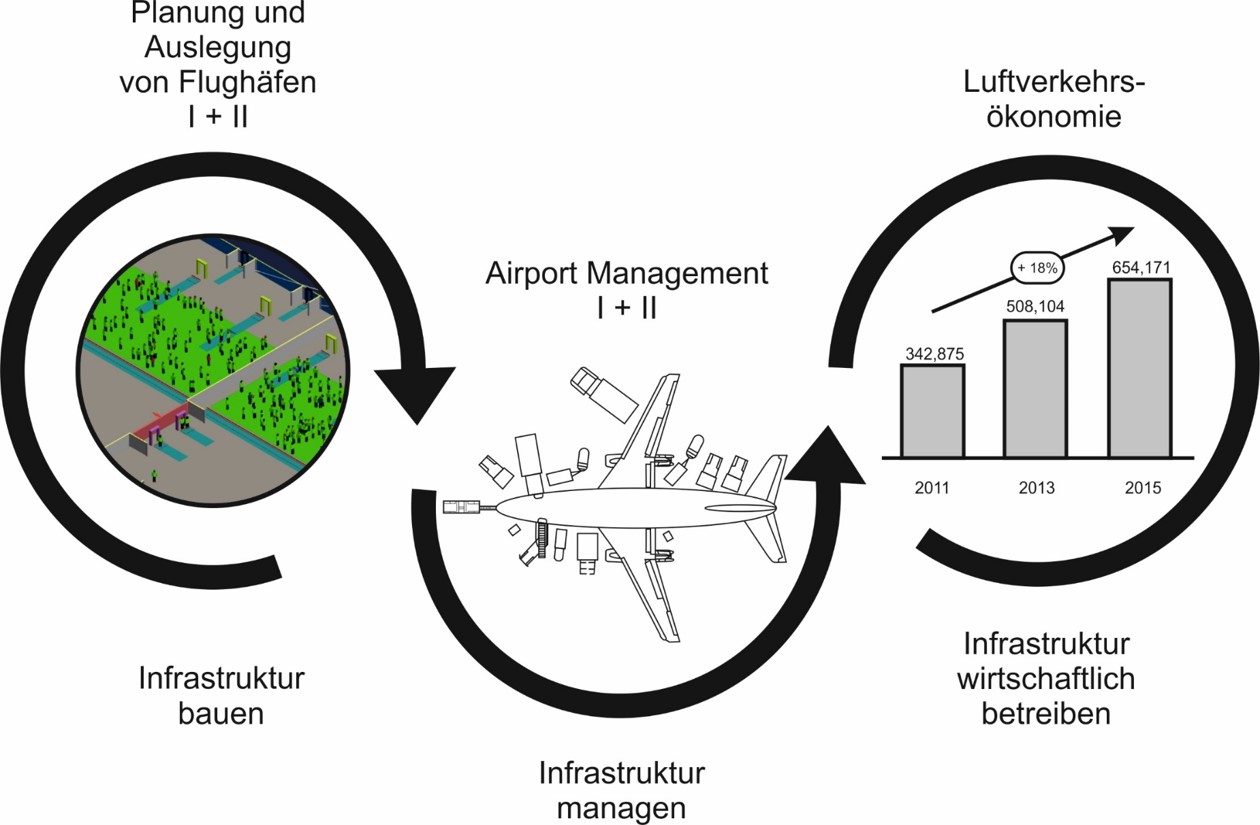 The cooperation of the Chair of Air Transport and Airport Research with the Instituto Tecnológico de Aeronáutica (ITA) in São José dos Campos in Brazil has already existed since the end of the 2000s through scientific exchange. In 2016, this cooperation was intensified and formalized in the form of an official cooperation agreement (SEA and MOU) between the Faculty of Civil Engineering and the Laboratory for Machine Tools and Production Engineering (WZL) of the RWTH and the Instituto Tecnológico de Aeronáutica in Brazil. The cooperation agreements were signed on September 23, 2016 by Prof. Anderson Correia (Rector ITA) and Prof. Markus Oeser (Dean Faculty of Civil Engineering RWTH) in Aachen. The concluded cooperation agreement allows not only the exchange of Bachelor and Master students but also the exchange of doctoral students. The scientific exchange as well as the joint work on research questions are also in the focus.

Since the cooperation agreement in 2016, the Chair of Air Transport and Airport Research can look back on various successes of the cooperation. In addition to joint publications at the annual SITRAER Conference (Sao Luiz (2016), Rio den Janeiro (2017), Brasilia (2019)) as well as bi-national workshops such as the one held in Sao Jose dos Campos in September 2018, the exchange of scientists and young researchers is particularly important.